This beautiful reproduction of the original manuscript map of “Iaponiae Insulae Descriptio” was hand painted on cotton by expatriate Tibetan monks living in exile in Khatmandu.

This beautiful reproduction of the original manuscript map of “Iaponiae Insulae Descriptio” was hand painted on cotton by expatriate Tibetan monks living in exile in Khatmandu. The rich colors were derived from pigments, hand mixed in traditional fashion, handed down over the centuries, using precious mineral and vegetable dyes. Painstaking medieval painting techniques were also employed. The earliest significant European map of Japan was produced by Luis Teixeira, a Jesuit (Father Ludovico Teixeira, or Tesseira). This map was prepared in about 1592 and enclosed with a letter Teixeira sent to Abraham Ortelius dated February 20, 1592. The map, entitled Iaponiae Insulae Descriptio, appeared as an addendum to Ortelius’ atlas Theatrum Orbis Terrarum, published in 1595. Luis Teixeira, who was the son of Pedro Fernandez, the founder of a large family of cartographers, had been appointed cartographer to the Spanish crown in 1569. There is no evidence that he ever went east, let alone to Japan. Teixeira’s map, which was reprinted and copied over the next fifty to sixty years, represented a landmark in the cartography of Japan, and many subsequent European maps of Japan owed at least something to Teixeira. The map is distinguished by its depiction of Japan as three main islands. Korea is shown as a long island with an elongated point. The map was copied in the Mercator-Hondius atlas of 1606 with minor modifications and entitled Iaponia. The cartouches are different, as are the sailing ships which have been reduced in number to two. An ornamental dolphin is depicted south of Korea, on which there is a brief note in Latin to the effect that in war the Koreans are energetic, but cruel and barbarous. 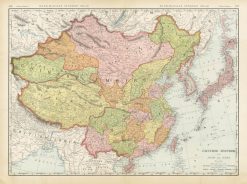 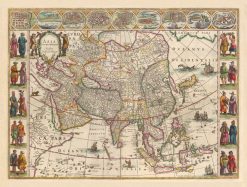 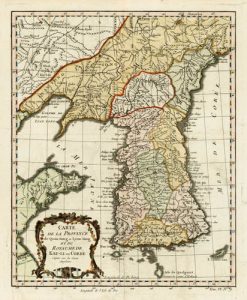 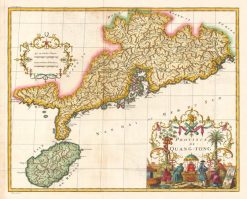 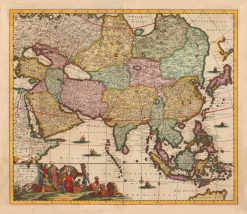 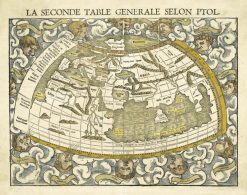 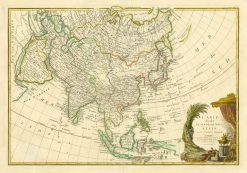 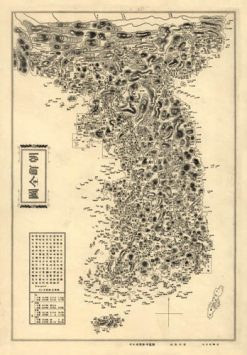